“Calls for game shooting to push ahead with finding alternatives to lead shot are growing louder, both inside and outside of the sport. Rob Yorke offers a personal view on the subject” One hundred and fifty years ago, wild meat was harvested, without the use of guns, to feed the burgeoning cities. In the 1890s, skylarks from fields and woodcock in woodland rides were netted and brought to Leadenhall Market in London. Breechblock shotguns brought harvesting meat to a new level. No more low-hung nets, the field sport had the challenge of killing cleanly and efficiently with the spread of shot propelled from cartridges enabling shots to be safely discharged at a prodigious rate. The material used for the shot, which earlier attracted the Romans to geologically diverse Britain, eventually saw the country become the primary lead producer in the 19th C. For many hundred of years the benefits of lead –  malleability, high density, low cost and its use in roofing, paint, ceramics, plumbing, as a fuel additive and in ammunition – outweighed its negative effects.

However, early users knew of the dangers associated with it. The Greek physician Dioscorides wrote: “Lead makes the mind give way”. It’s a neurotoxin that mimics calcium causing cells to absorb it mistakenly. Within the last year there have been fears over lead pollution following the fire at Notre Dame: a diamante-studded hoodie was recalled by River Island after it was revealed the garment could contain “lead in excess of legal safety levels: while according to a study by researchers at the University of Plymouth, decorative writing on bottles contained lead concentrations 900% higher than those in paint.

For his paper ‘Ingested lead pellets in waterfowl at the Ouse Washes 1968-73’, and with the assistance of local wildfowlers, G J Thomas ‘eviscerated’ hundreds of ducks to indicate the annual mortality of up to 700 waterfowl due to lead shot ingestion. Most died unseen, whereas Her Majesty’s mute swans perhaps died a little more obviously, from ingesting split shot from angling, which resulted in a ban in 1980s.

Much as I’ve laboured the toxicity of lead to humans (my family eat game I’ve killed using lead shot), the central issue of lead is its negative impact on wildlife.

Dr Tom Cameron, wildfowler and applied ecologist from the University of Essex, concurs: “This is the nub of the problem. I have always found the human health argument a distraction and this emphasis actually led to the whole [lead] issue being dragged into unnecessary debates. The evidence to ban lead ammunition for hunting was strongest on the effects on wildlife alone.”

The risk-based approach seeking evidence on the toxicity of lead to humans is reasonable and applied to other wild food – heavy metals are found in Omega3 health-providing oily fish (thus both benefit and risk) – so the government advises those pregnant and young children to avoid too high a consumption. The Food Standards Agency applies similar principles to lead, stating: “consuming lead is harmful, health experts advise to minimise lead consumption as much as possible” and that “eating lead-shot game meat on a frequent basis can expose consumers to potentially harmful levels of lead”.

As more than 70% of game shot in the UK is traded with the EU, Waitrose’s decision to stop selling meat shot using lead ammunition after 2020 is a portent of the UK’s ability to do business with more cautious markets.

“Even though Waitrose is the largest individual purveyor of game in the UK it is only a fraction of the total UK game market,” Tom Adams from the British Game Alliance (BGA) told me. “It’s decision to pilot lead-free alternatives this season isn’t the calamity many make out but does flag up a precedent on the direction of travel. The shooting industry isn’t yet prepared for this to be commonplace within the food sector, but it is an important signal for the industry to start driving change that is no doubt coming anyway. Meanwhile, the BGA will continue to promote game shot – with or without lead – as a healthy and sustainable alternative to other proteins.” 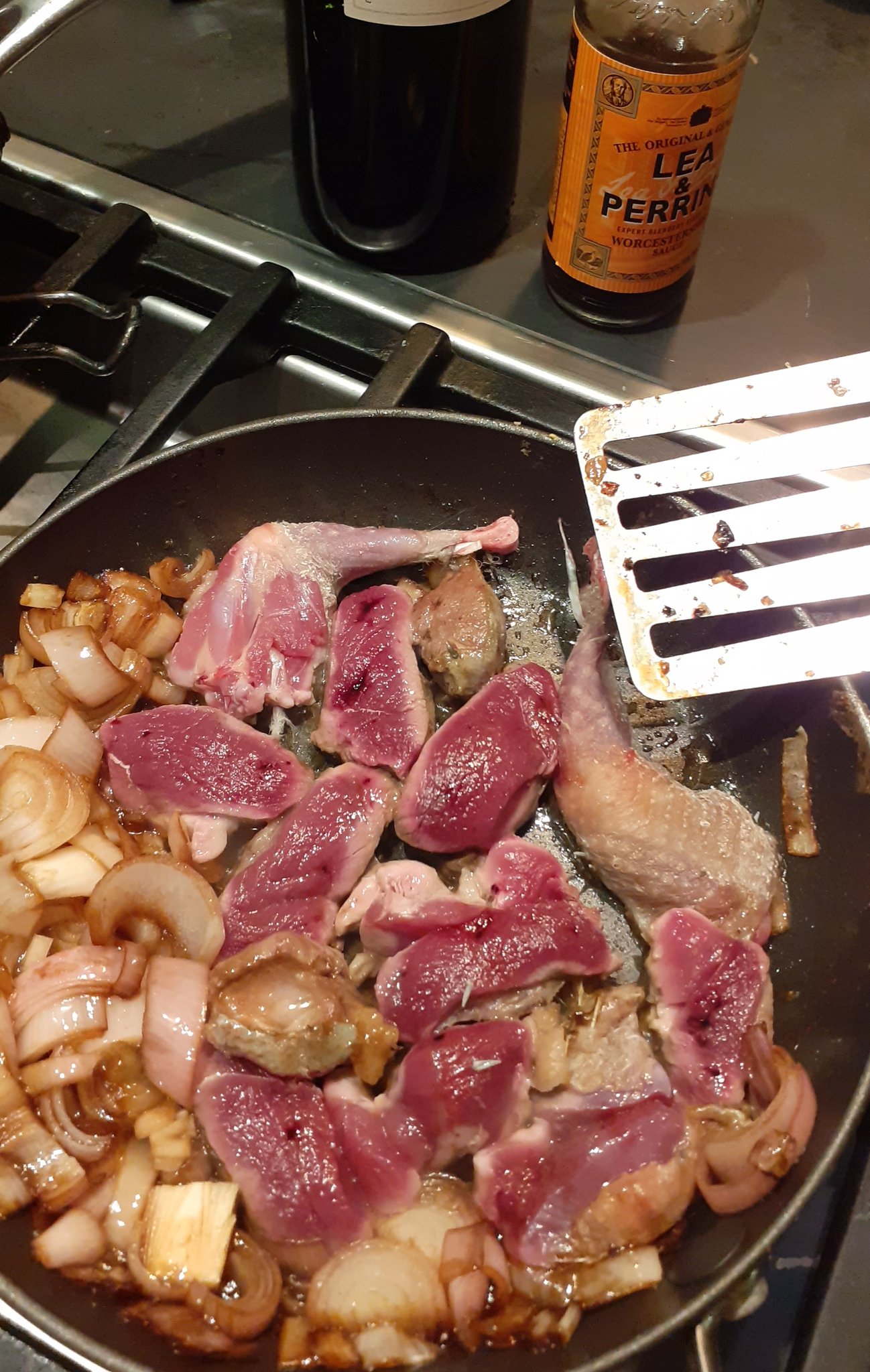 Community leaders have their say

So where do the voices within the shooting community stand on the debate on lead shot and its potential alternatives? BASC issued me a statement confirming it had “witnessed a growing level of interest from members asking for information about lead shot alternatives. The increasing availability of biodegradable cups for use with steel shot has appeared to reignite the debate, especially for those who had previously refused to use steel shot because it resulted in plastic littering. We are supportive of the market reacting to the shooting community’s demand for alternatives”.

Change will not be easy. As Tim Bonner, CEO of the Countryside Alliance (CA), notes: “It is always challenging but the inevitability of the restriction processes that are already in train means that whether we like it or not we have to face up to the reality of a lead-free future. The important thing now is that when, not if, that day comes there are alternatives in place for all types of shooting.”

The EU will continue to be a market for game alongside being a tough regulator on both lead and plastics owing to environmental concerns. A number of key stakeholders have already anticipated it.

“Despite grouse living in often naturally lead-rich environments (historical lead ore mining in the hills), the Moorland Association has been explaining to its members that we can expect lead shot to be banned on peatlands within the next few years and as a sector have urged cartridge manufacturers to produce sustainable loads, wads and cases,” says its director Amanda Anderson. “There is little point in ceasing to use lead shot if its replacement is propelled within a plastic wad. Biodegradable cups were demonstrated at the Game Fair in 2019 and so manufacturers are rising to the challenge which we welcome, alongside more recycling of cartridge cases” Liam Bell, chairman of the National Gamekeepers Organisation (NGO), adds: “Modern, non-toxic shot is just as effective as lead, providing of course that you shoot at things within range. The problems we had with the old steel cartridges are a thing of the past. The biggest issue that I see with steel shot, is the use of the plastic wads to shoot it. Rather an anomaly, seeing that we are using non-toxic shot to help protect the environment, while at the same time using single use plastic wads to push the pellets out of the barrels.”

We have no time to waste and, in my opinion, some shotgun cartridge manufacturers are behind the curve. If they wait for demand to pick up, there is a risk of the unsustainable nature of plastic wadded cartridges with toxic loads used in an activity increasingly scrutinised by its opponents, gaining a wider negative profile. If politicians see the matter shift within the window of discourse (see Overton Window), reflecting more votes within a rising public interest, the enforcement of sudden regulation would damage the shooting community.

In line with REACH (Registration, Evaluation, Authorisation & Restriction of Chemicals) Regulations on use of lead in the environment, the European Commission has just requested the European Chemicals Agency to provide a ‘restriction dossier‘ in respect of rick to wildlife and human from lead. In or out of the EU, the UK government will not wish to bypass an environmental subject where a private sector industry has the potential to remove this concern.

BASC’s Christopher Graffius recognises the restrictions the EU may implement, which in turn may be duplicated within the UK.

“Ammunition companies are making significant strides towards developing appropriate wadded steel shot. Game shots will need to learn from wildfowlers about the capabilities of non-lead ammunition and the need to adapt shooting styles to achieve clean kills,” he says.

During my discussions with Tim Bonner from the CA, he cited “the inevitability of further restrictions” and said that “full prohibition through regulatory process over the next decade or so has stimulated research and development, so I think we will soon see more alternative options.” Some of the manufacturers are starting to move. Jocker cartridges (France), BioAmmo (Spain), Gamebore and Eley Hawk (UK) are now marketing steel shot with biodegradable wads with a continued push for wider recycling of cartridge cases or even weather-proof cardboard ones being reinvented.

Nick Levett–Scrivener from cartridge importers Shooting Star Ltd. told me that when it comes to steel, “it is a perception rather than a reality. Modern steel cartridges have advanced a lot. The steel is iron so is a little softer and the powders are now produced to suit the shot and at sporting ranges.

“It works well and shot suppliers are looking to alternatives.”

Steel today is nothing like the hard bullets used by the likes of the hunter, wildlife ecologist, forester, and conservationist Aldo Leopold [in the 1930s]. Now it is more an amalgam of soft iron, which when in the correct size and married with powders suited to the velocity required to effect a clean kill at an appropriate range, are as good as lead. There are, of course, more materials to replace lead – from bismuth to tungsten, metal mixes, copper-coated options  – though these are beyond the scope of this article.

While some Guns might not give a second thought as to what goes into their cartridges, now is the time we should be giving the subject more thought than ever.

Evidence is important but perception matters. It would be remiss not to mention the Lead Ammunition Group (LAG), convened by the Government in 2010 to assess and address the risks from lead ammunition. Hard lessons can be learned from the process and its failure to reach a consensus. Perhaps the wrong representatives from stakeholders were in the room, running ahead of the crowd without bringing the crowd with them, or there was an overly tight remit, exacerbated by posturing on behalf of members: rather than working collaboratively with others who may have held different values, but had common purpose over this tricky issue.

Perceptions ran rife. Those proposing to ban lead were perceived as anti-shooting when in my view they were calling out the intransigence of the pro-shooting community’s inability to even countenance compromise on the use of lead.

But this is in the past. Current regulations on use of lead shot across the UK are unworkably illogical, the Danish shooting community overcame its fear of lead being banned to then recognise it as being of “paramount importance for the long-term political sustainability of shooting”.

I believe the writing is on the wall for lead and the shooting community is in danger of becoming a sitting duck caught in the cross hairs of tougher regulation and public mistrust. I sense the shooting community is ready to move beyond what a hunter once told me, that ‘weaponising’ of lead by the anti–shooting lobby and the feeling among shooting organisations of being seen to ‘cave in’, makes it all difficult to move to a better place”.

There are now urgent matters that make moving to that ‘better place’ more relevant today without fearing for shooting’s future.

This is not a matter of just standing united in resisting change. There is room for humility while sometimes sidestep animal rights activists who are not interested in shooting thriving in any form, to seek to disrupt the disrupters of shooting by ‘gaining the lead’ in setting up environmentally sound practices, raising standards and pressing forward with a lead-free world now.

Clearly, not everyone is ready for change at the same time but as a conservation scientist told me, “a voluntary switch away from lead would send an amazingly strong message as to shooting’s conservation credentials; to continue the status quo is rather damning of ourselves”.

Addendum  – letters feedback – see here and here and in The Field. Author’s letters in BASC mag and CLA mag

Research paper 2019 ‘Perspective of lead ammo from view of users’

2 thoughts on “We need to talk about lead shot”