“What makes a freethinker is not his beliefs but the way in which he holds them” Bertrand Russell.

If you ask awkward question, voice unsaid thoughts, hang out with diverse company at farming conferences, wish to find common ground between polar views over a beer – be prepared to hold onto your hat. 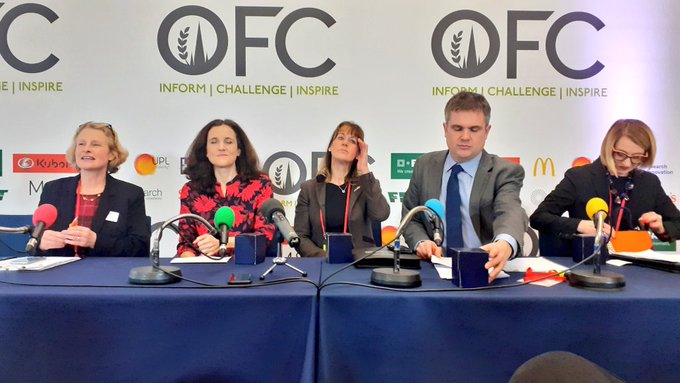 At a talk to a local farmers’ association, a farmer took umbrage at my daring to mention a competing narrative re upland land use. That he wanted to do something unpleasant to my guts. On another occasion, I had to remind a room of ecologists, baying for “farmers who had trashed the land”, of the post-war policies which drove farmers to dark places.

Basically, I take either heat or stony silence, for daring to explore some tough issues in a changing countryside.

‘Get off the fence’… is a refrain sometimes aimed at me (see here). Social media is no friend of nuance (listen to this brilliant BBC 5x15min radio series on ‘Death of Nuance‘). Many of us have different values or politics, but common interest over conservation. Glyphosate is important, used judiciously, for a range of uses. From lowland minimal farming cultivations to tree planting on bracken hillsides (see here). Both locking up carbon.

Or even to stop newts from vaulting over fences (pic of ecologist spraying grass on pipelaying scheme, above).

I’m a big fan of Leopold. Many are. A conservation hero lionised by both hunters and wilderness-seekers for different reasons. His early works are a refreshingly self-critical ability to adapt and change his thinking over his lifetime. (Worth a read of his book ‘Southwest‘ – which informed him way before his much more famous Sand County Almanac)

Forestry is good for mitigating effects of climate change and delivering woodland wildlife. As long as it’s not on ‘deep’ peat, near ground-nesting wading birds of conservation concern or the “wrong tree”. Shooting can play an important role in conservation land use. As long as it conforms to eating the result, lead-free shot and game bird densities.

What’s not to like when wild areas created by landowners for wildlife, may also offer brilliant sustainable hunting opportunities?

There’s form on this issue. Hard at times to express under today’s sharp optic of “all hunting bad” reductionism. Europe and America can handle it better. Here in the UK, it’s harder – even for academics. Sir Peter Scott’s love of shooting ducks lead to his founding the Wildfowl and Wetlands Trust honed on naturalist skills: a matter increasingly airbrushed out of some narratives.

I encourage my children to be curious, inquisitive, even to the point of contrarian. Question authoritative-sounding views. Look the other way with groupthinkers. It’s hard to. Learn to smell the hint of reductionist fervour in media-sought attention. Observing the ‘backfire effect‘ armlength is harder to avoid than playing into it. How to split the subtle difference between an agitator (keep the fire burning in one space) and a disruptor (seeking ways to move the fire to a new space). Ouch!

Science is more about perpetual curiosity and uncertainty rather than definite evidence-base. It could inform adaptive action, set within competing narratives and objectives within the same space.

Tolerating other possibilities or points of view, scrutinising old conversations, while maintaining lines of dialogue, are important. There much to collaborate on across the conservation sector. Without a need to take all the credit or ‘own’ the process. Co-design only works if you co-construct from the start. Make more elbow room at the table!

We can question each other without falling out.  Or always having to tell everyone on Twitter about how we think, vote, align. The ‘disruptive’ questions I pitched at Gove (2018), Goldsmith (2019) or Monbiot (2013) don’t necessarily hold a mirror up to my own beliefs.

After 30 years thinking about all this, 20 years of letter writing, 10 years on Twitter, perhaps I should just accept myself as a wicked inconvenient conservationist.

Feel free to fund, thanks